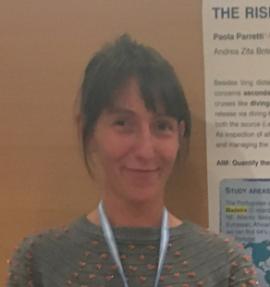 Paola Parretti is an enthusiastic PhD student in marine ecology from University of Azores.

After her graduation in Marine biology (2010) from the Polytechnic University of Marche (Ancona, Italy) she moved to the Azores within a European Project (Campus World). Since then, she has been involved in several European project (FP7 and ERANET) where she developed her passion for marine management and non-indigenous species.

Her PhD project is focusing on proliferation of marine non-indigenous species (NIS) in a global change scenario. Especially she aims to contribute for an efficient management of NIS in the Archipelagos of the Azores and Madeira.

Her study is supervised by Prof Ana Cristina Costa (CIBIO-University of the Azores) and Dr Joao Canning Clode (MARE-Madeira). During her thesis she had the opportunity to collaborate with international team both in Italy (University of Pavia) and in Spain (University of Cadiz).

Recently she participated as speaker in the Xth international Conferences on Marine Bioinvasions (Puerto Madryn, Argentina) where she was rewarded with an Early Career Scientist Travel Award.